TV Advertising in 2020 and Beyond

The television media industry is a huge, expanding business undergoing drastic changes. Technology is making it possible to execute more targeted media buys across new TV platforms and  formats. Advertisers can unlock new opportunities to drive meaningful engagement from television media by staying ahead of the game. Let’s look at what lies ahead for the TV ad industry in 2020 and beyond.

Media sellers use ratings to determine the size and composition of a program’s audience and how much they can charge advertisers for their inventory. Ratings have been the standard method for buying and measuring television advertising since they were created by the Nielsen Company in the  1950s.

Ratings are essentially percentages measuring the portion of a group – such as households, women 25-54, or adults 18-49, – who are watching a given show. Adults 18-49 is the primary demographic by which ad rates are set for TV programming. A rating point is equal to the percentage of people in the demo. For adults 18-49,  one point is about 1.28 million people. Therefore, if a show has a 2.0 rating it means that two percent of people in that age range, roughly 2.56 million people, watched the show.

Ratings use age range and gender demographics as proxies for audience interests and behaviors. Yet, because age ranges are so broad, the individuals within these segments typically share very few behaviors, interests, and motivations. Another huge flaw of the old system is that it calculates ratings using a small panel of TV viewers. A panel of about represents just a tiny fraction (about 0.018%) of the nearly 302 million individuals in the national TV universe. The sample is simply too small to accurately measure the viewership of today’s fragmented TV audiences.

New technologies have entered the market that allow for more precise measurement of television audiences,  but the industry as a whole has been reluctant to move away from the standard way of doing business. This has been the case for businesses across both the selling and buying sides of the TV media industry. Despite the inaccuracies of traditional ratings data, getting the media industry to move away from a methodology that has been in place for decades to embrace a new system for audience measurement has been a huge challenge.

Why Has the Media Industry Been Reluctant to Adopt a New System?

TV stations have universally depended on ratings as currency for selling media inventory, but they are not opposed to adopting a new system.

While most software has been based on legacy ratings, new industry technologies that use household level viewership data are beginning to saturate the market.

The costs represented for competitors is most often based on SQAD, which is Nielsen ratings dependent.

Often the largest ad agencies in the country drive change in the industry and they have been reluctant to make the switch as their systems and processes will need to be rebuilt.

The Television Bureau of Advertising (TBA) is leading the charge for an industry wide transition to a new system of measurement based on impressions. In September, TBA announced plans to convert local broadcast audience measurement from a ratings-based to an impressions-based measurement system. The TBA is pushing for industry wide implementation by January 2020.

Following TBA’s announcement broadcast networks like NBC, CBS, ABC, and Graham say they will begin using impressions as their basis for media measurement and selling. This fundamental change reflects the industry’s need to capture and measure the audiences who consume content across platforms and devices.

These new technologies not only help advertisers find and target their most valuable audiences at scale, they also measure audiences across platforms with a common metric. Converting rating points  to CPMs (cost per thousand impressions) means there’s now one currency across broadcast TV and digital media. The ability to compare apples to apples tears down the walls between digital and broadcast media. With impression based measurement, the same audience can be aggregated across multiple platforms to provide advertisers with a more complete picture of the customer path the purchase.

Its no secret that the way audiences are watching television is undergoing a seismic shift. The good news is that, although audiences are moving their attention beyond linear television, people are actually watching more hours of television. The change isn’t so much the number of eyeballs watching TV, but the viewing TV experience, which has expanded across multiple screens. The shift to multi-screen viewership is having a profound impact on messaging and content delivery.  As a result, advertisers must move with it by building TV campaigns across multiple formats, platforms and devices.

Ad-supported video content made available on an on-demand basis for streaming to end users. These services are primarily available at no charge but require users to view non-skippable ads in order to access the content.

Television spots that can be swapped according to the end-user so that two households may be served different ads while watching the same exact programming.

Targeted ads delivered on a home-by-home basis via set-top boxes. These ads include both linear and video-on-demand (VOD) delivered in this way, but exclude Connected TV and other OTT delivery methods and smart TV delivery.

Refers to the delivery of  content “over the top” (OTT), or  beyond the traditional set-top box. OTT devices use an internet connection to serve television media, such as apps for desktop, mobile phones and tablets, video game consoles, HDMI sticks, streaming boxes, and smart TVs with built in apps

Technologies that identify the content that is served across internet connected devices, such as smart TVs. ACR enables advertisers to accurately identify what TV content a household watched so brand messaging can be tailored for every home based on TV exposure.

It’s all About Second Screen Engagement

Research shows that about three quarters of  TV audiences simultaneously engage with content on a second screen, such as a smart phone or tablet.  To get the most out of  TV in this evolving landscape,  advertisers must focus on extending messaging to capture audience attention on multiple channels simultaneously.

While technology is opening the door for more accurate identity-based targeting across screens and devices, the fact of the matter is that the media landscape is complex.  Most often, advertisers lack the in-house marketing infrastructure required to address these complexities.  A media agency with an extended network of data partners and advanced technologies can provide the tools needed to effectively identify  and  target your key audiences across every screen seamlessly.

A growing number of marketers are embracing a cross device approach in efforts to drive higher conversions. “Television advertising alone does not have the same impact that it once had,” says Viant CMO Jon Schulz. “But when marketers embrace this change and integrate the second screen by retargeting audiences shortly after their television creative airs, consumers can be up to 72% more likely to convert within the next 24 hours.”

Because the majority of TV-driven online searches take place within the first few minutes after a TV spot airs, advertisers can take advantage of this opportunity to connect on the second screen by securing top placement on search engine listings immediately after your TV ad is served. Measuring TV ads against spikes in your online traffic can give you an idea of how effective your TV ads are at driving response. 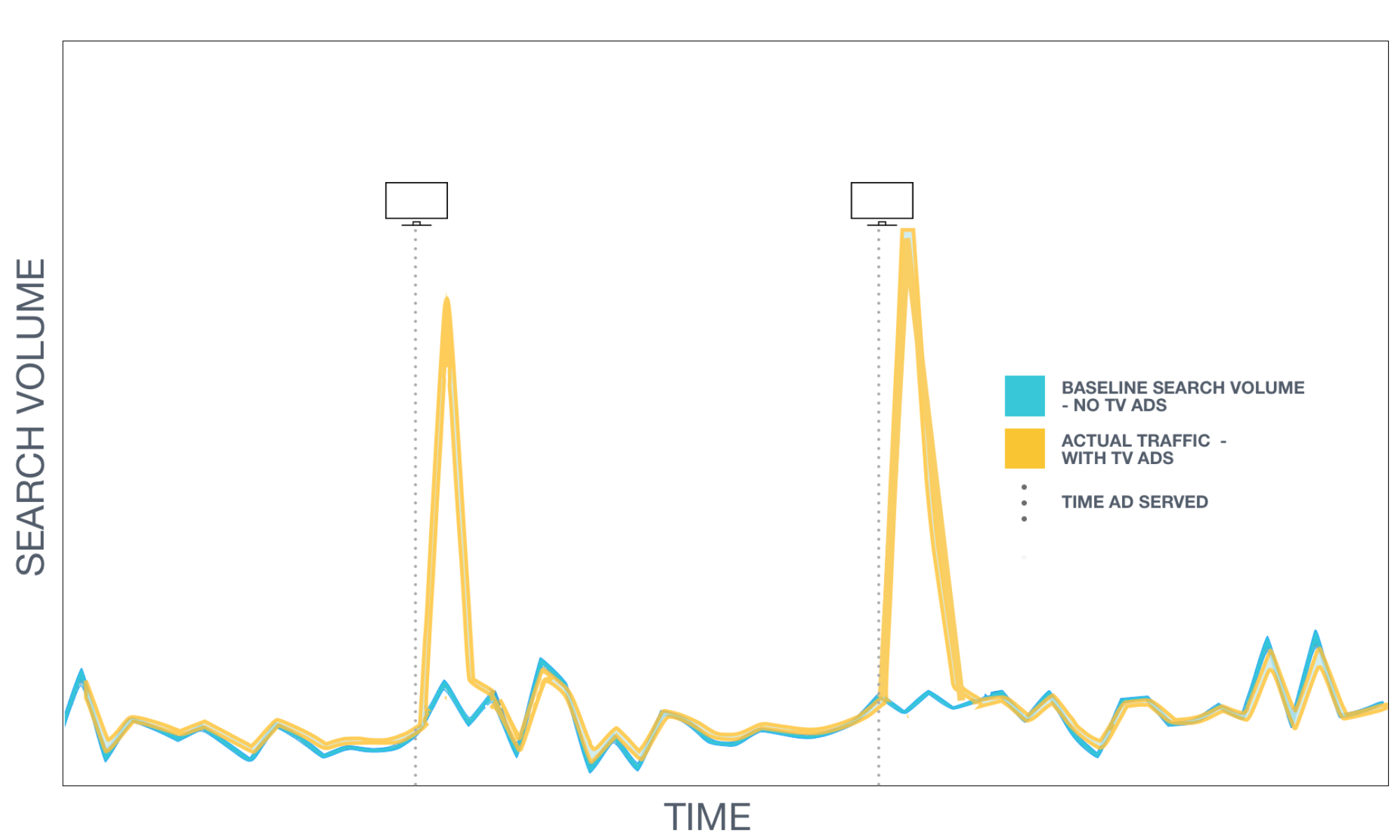 How to Measure TV’s Impact on Online Search

To understand how your TV ads drive online brand interactions you need to first measure your baseline web traffic without TV ads airing. Once a baseline is established you can compare it against traffic immediately after a TV spot airs. Look for spikes in the minutes after your ad runs.

Advertisers are expected to spend 29.9% of their total  ad budget on TV in 2020.  So how will spend be divided across TV ad formats?

TV ad spend (excluding digital formats) in the US is forecast to reach $69.52 billion dollars in 2020. While this estimate marks a slight increase from 2019 TV spend (at $69.17 billion) due to election year political ads,  forecasters predict a slow but steady decline for subsequent years.

Digital video ad spend is expected to grow to $40.13 billion dollars in 2020.  One trend we’ve seen in 2019 that will continue gaining traction is  short bumper ads.  YouTube and Google both launched 6-second bumper ads this year to help advertisers extend brand reach in a short time frame.

Addressable ad spend is expected to reach $3.37 billion in 2020, while Connected TV (CTV) is predicted to hit $5.08 billion. For advertisers wanting targeted TV ads, connected TV is becoming a more attractive option than serving addressable ads over a linear broadcast. Because linear addressable ads use data for targeting, they run a greater risk of violating data privacy laws as opposed to regular TV ads. Although the broadcast industry is working on solutions to ensure compliance with upcoming data laws like the California Consumer Privacy Act (CCPA), concerns over data privacy regulations may dampen the enthusiasm of addressable TV advertising.

Another challenge addressable poses is scale, which can be particularly difficult to achieve since a minimum number of targeted households is necessary to run a campaign. And then there’s the issue of inventory. Out of the 120 million TV households in the US, more than 65 million can be served addressable, or targeted, ads. However, within that smaller addressable TV footprint, only about 1/8 of the ad inventory can be used for addressable advertising.

OTT is partly offsetting network declines in linear TV sales.  Sales will shrink 3% to $41 billion in 2019. Declines would have been as high as 3.6% if not for OTT sales, Magna found.  According to Karen Ring, head of research at Telaria, a leading platform for video publishers, “Nearly one-third of total households aren’t paying for a cable or satellite connection at all. More households are now enabled with streaming capabilities than cable. We’re at about three-quarters of all households now, and soon we’ll be at 80 to 85 percent, the point that signifies market saturation.”

The rise of CTV  presents a world of rich opportunities to reach and engage audiences across television like never before. But navigating this new environment will surely present a learning curve for many advertisers. Still it’s worth the effort. As more players enter the OTT space in the near future, those who invest now will be positioning themselves for greater impact and success.

Advertisers Are Moving to Programmatic TV

Programmatic TV advertising uses an automated process for buying TV ads combined with data-driven technology to target consumers at the individual household level and deliver more personalized and relevant ads to viewers. Programmatic TV ad spend will reach $4.73 billion in the US, according to Statista. It enables advertisers to serve messaging across linear, addressable, VOD, and connected TV  with reach and frequency control.

The IAB recently reported that nearly 40% of advertisers have an in-house programmatic strategy, reflecting the desire for brands to take control of their media buys. While programmatic TV looks promising, making the shift isn’t easy.  There are challenges and hidden costs involved in doing so, such as tech and maintenance costs. The complexity of advertising technology and the need to access the necessary data and integration tools are some of the biggest obstacles brands face when bringing programmatic in-house.

Partnering with a media planning and buying agency experienced in programmatic advertising is a good idea, as they have the infrastructure, expertise and resources already built into their operations. A knowledgable agency can help you avoid common programmatic pitfalls and ensure your efforts don’t fall flat.