After Meta’s stock price took a nosedive in early 2022, many people were left wondering what happened. In February, Meta admitted it may continue to lose revenue due in large part to industry-shifting change: Apple’s iOS privacy update. Privacy has been a hot topic in the ad world for the past few years. The thought of having personal data shared has spooked some consumers and forced tech companies and government to act.

In fact, the Banning Surveillance Advertising Act was recently introduced to ban the use of a user’s personal data altogether. As a result, companies like Google, Apple and Meta are making changes to their ad targeting. This article will focus on Apple’s iOS14 update and how it affects Facebook ads and other digital marketing efforts.

What Is Apple’s iOS14 Update?

Apple threw a wrench into many advertisers’ plans when they recently updated their privacy options for users. Apple consumers now have the option to opt out of any data collection in apps. Previously, Apple allowed a degree of cross-app tracking where advertisers could track your data across apps and websites owned by different companies. Now users will receive a notification on their phone asking them to either opt-in or out of being tracked. This privacy change doesn’t seem to be going away anytime soon. Apple’s iOS 15 update still offers the same privacy feature, with 72% of iPhones running it.

Why Is Apple Doing This?

Apple claims their users should have the right to choose whether or not their data is collected. Apple released a statement saying:

“We believe that this is a simple matter of standing up for our users. Users should know when their data is being collected and shared across other apps and websites — and they should have the choice to allow that or not. App Tracking Transparency in iOS14 does not require Facebook to change its approach to tracking users and creating targeted advertising, it simply requires they give users a choice.”

How Did Meta Respond?

Needless to say, Meta wasn’t thrilled with Apple’s update. Meta specifically called out the impact the iOS update will have on small businesses that advertise on Facebook. In fact, they took out an ad claiming, “the average small business advertiser stands to see a cut of over 60% in their sales for every dollar they spend.”

Meta estimates the changes will cost the social media giant around $10 billion in losses in 2022 alone. And Meta isn’t the only business that may be hard hit by Apple’s changes. 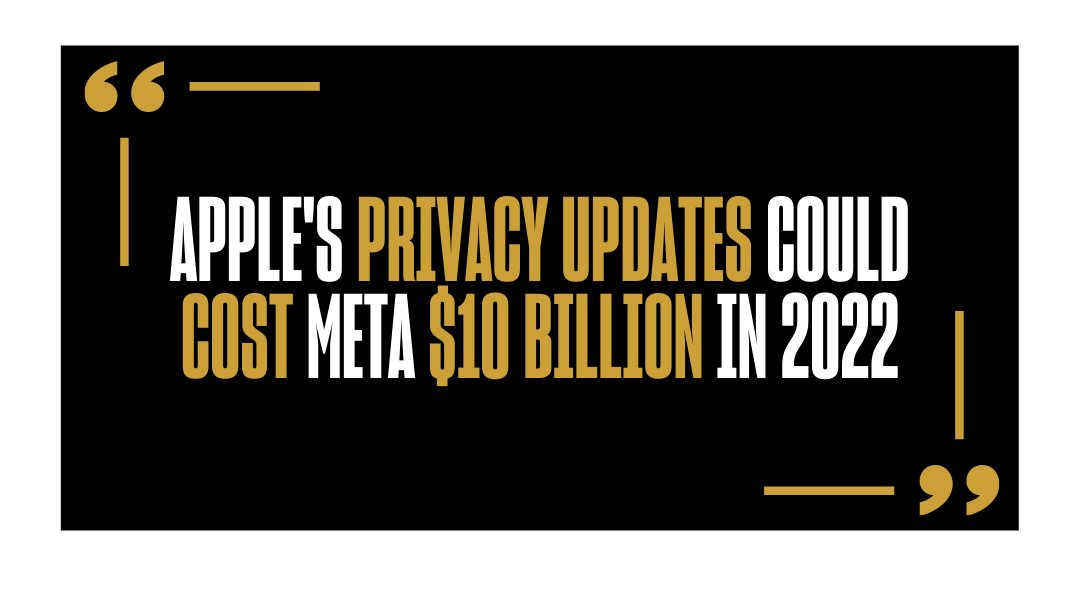 What About Other Companies?

Beyond Facebook ads, Apple’s iOS 14 update has impacted other companies as well. Snap’s stock plummeted after it didn’t meet its sales expectations. Snap blamed Apple’s privacy changes, saying they pose a risk to future earnings. Peloton also blamed Apple for their stunt in user growth. Google’s services have been affected by the iOS 14 privacy changes, as well. Google display ads, Youtube, and Gmail will all be impacted as targeting and data sharing is now restricted. On the flip side, Twitter has avoided any real setbacks from Apple’s changes. This is largely because most of the platform’s advertisers don’t rely on highly targeted ads.

What Does the iOS14 Update Mean For Digital Advertisers?

Apple’s iOS 14 privacy update will have some very real consequences for advertisers big and small.  The unfortunate reality for marketers is this will make things more challenging (though we don’t expect anyone to cry for us). Here are a few things you should be aware of:

What Should Digital Marketers Do?

In a word: adjust. Apple made their changes. We have no choice but to embrace them. Users seem to be taking kindly to this update, as about 63% are choosing to opt-out of being tracked. That makes the remaining 37% much more valuable to your marketing efforts, as these are willing consumers. Advertisers’ first-party data will be more important than ever.

Brands should entice consumers to opt-in or sign up for loyalty programs to build their first-party data. Consider offering discounts to incentivize consumers to share their email address with you. Furthermore, advertisers can focus on geofencing and geo-targeting to target local consumers. While this may not completely replicate other targeting methods, it will still provide some level of targeting to make your campaign more efficient.

Target Wingman As Your Next Agency

The iOS 14 update can be tricky to navigate. Especially if you don’t completely understand the ins and outs of ad targeting. As companies update their privacy settings, you must update your strategies. Speak with Wingman Media today to see how we can ensure your Facebook ads and other digital advertising efforts are still efficient and effective. We’ll guide you through all the changes and work with you to make sure your campaigns are successful and your goals are met.